The West Rand Badminton Club has been open since January and players have already participated in their first badminton tournament.

Faster than an F1 racing car and just as exhausting, if not more so than other ball sports; badminton is a sport that anyone can easily learn, but it requires focus and endurance to reach a competitive level.

The sport with a racket, a shuttlecock and a net has a rich history from as far back as ancient Greece and China, but the sport as we know it today was first played in 1873 in England.

Since January this year, Krugersdorpers have been able to enjoy this sport on a weekly basis at the West Rand Badminton Club on Key West shopping center’s fourth parking level at entrance 7.

Reaan Immelman wanted to get the sport going in town to teach the youngsters from nine to 18 years old a love of badminton, and to produce some champions in the process. As a result, he made two courts available at the Action Sport Club in Key West, with plans to add two more courts later.

“It is the fastest rocket sport in the world, ”Reaan explained.

The club currently focuses on nine- to 13-year-olds but wants to take in older children soon as well.

Earlier in March, they sent three players to a tournament in Alberton where they competed in the u.15 division, and one of their players reached the quarterfinals. They have already started preparing for the tournaments that will take place later this year.

The club currently has 12 permanent members, but around 70 social players come to play there every month. On Wednesday evenings, anyone who has booked in advance and paid track fees can come and play there. The course fees are determined per hour, and the club provides the equipment such as rackets and shuttles. 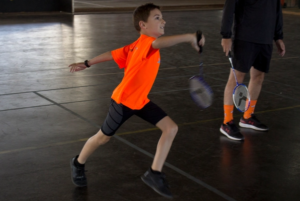