Badminton will be one of the first sports with opening-day action featuring SA on Friday.

According to head coach Stewart Carson, it’s a new-look team. “Only Nita Scholtz played at the last Games in Gold Coast. She was very young there, she got invaluable experience  and  it’s worked out very well for her and SA badminton.”

Scholtz is by far the best South African in the national and continental mix, while in the singles, Caden Kakora was under-19 African champ. The top doubles combo will be Rob Summers and Elliott.

As always, quality opposition in the Games build-up is a problem, but the SA team had a good few training days in Nottingham before moving to Birmingham. “Training went well, but we do need match play in the Games Village. We’ve played the Maldives in a practice game and are hoping for another opportunity before Friday,” Carson said.

Should SA manage to beat Jamaica and Zambia and reach the quarterfinals, it would be SA’s best badminton performance at the Commonwealth Games.

Carson said his young players have had some adaptations to make in England. “They’re all on the raw side and Nottingham was by far the biggest hall they’d played in, so it was a bit of a shock for an hour or so, but all beneficial for Birmingham.” 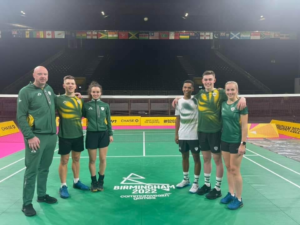