An open day was hosted at Wanderers Sports Club on Saturday 20th November 2021.

Admin staff from Wanderers Club, Harvey Ferreira and Dave Calvert all arrived early to set up the 4 courts, nets, and general area. The courts were laid out professionally and due to the slightly higher wind speed we used weights to stabilize the nets and structure.

The weather was overcast and a higher than ideal wind speed was evident throughout the day.

Harvey provided rackets for use and shuttles, which was extremely important, as we found that air badminton requires rackets that have thicker strings and strung with less tension. Two types of shuttles were in use, purple and orange, of which we found the orange shuttles to be more durable and visible throughout the day.

Players of all ages, cultures, skill levels turned out to participate on a social level and enjoy the day!

The courts were filled from 09:00 through to 13:00, some playing singles, others doubles, and 1 court had 3 on 3. Players mixed and swopped courts to enjoy playing with friends and alike. The outline of the courts made the game more “real” and competitive…even though the players were determined to reach every shuttle, no matter if it was in or out.

The day created a family or community environment and was painted with laughter and a very sociable atmosphere.

We look forward to hosting another open day in January 2022

Thank you to Harvey Ferreira and BSA for the assistance and support in having a very successful Air Badminton day! 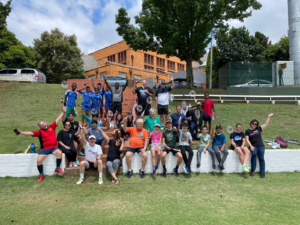